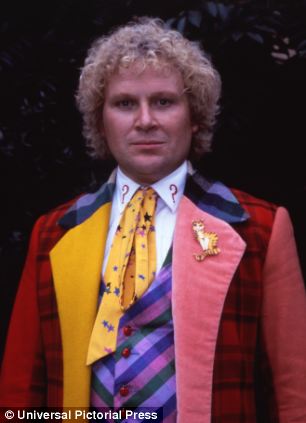 He's said nothing derogatory about your performance, he thinks you are fine, but he thinks a new Doctor will give the programme a boost.

I have pointed out that you have not done three years, and that you have done only one and a half seasons, but he remains adamant that that is long enough and it's time for a change.

He asked me if I was prepared to commit myself to the programme for four years. Having said yes in to four years of 26 episodes a year, I actually did one year of 26 episodes or the equivalent , nothing at all the next year, and just fourteen episodes the next.

Then I was unceremoniously bundled out. So I felt fairly aggrieved. When I saw the size of the role I was quite taken aback.

I'm on stage a lot of the time although I do get a breath occasionally, but with the nature of the piece it jumps very quickly between scenes.

In that respect I took a deep breath and threw myself into it. Alma Cullen who wrote four of the hugely successful TV episodes has written the play, which given its setting I think is quite ingenious.

I didn't watch any of the TV series, as it's such a strong role that is so inextricably linked to John.

I didn't want to just re-enact the part as an imitation or an impression of the role he played on TV. It certainly is an iconic role.

Hopefully I can take the spirit of Morse and make it my own while endeavouring to fill the shoes of the late and very great John Thaw with as much distinction as I can.

So really all I have to do is learn the lines and hope that the audiences will accept me. I worked my way through the novels during the summer.

I found them incredibly useful in getting into the skin of the grumpy genius but I have also enjoyed reading them as stories.

However, I have been astonished, and slightly appalled, at the similarities between Morse and myself. Whilst I may not be of slight build with a paunch, well not the slight bit anyway, I share many of his characteristics.

I did Greek at grammar school. I don't like spiders, blood or heights. I prefer instant to ground coffee. I love doing the Times crosswords and when I did it on a daily basis could do it in much the same time as Morse.

I get hot under the collar about the misuse of English and correct people's grammar. I cannot wear wool.

I was emphatically not a boy scout. I played a bit of tennis and had a mean backhand. I didn't study physics.

I could never bear not knowing what words meant and always had to go and look them up in books too. I had a Meccano set and read the Dandy and the Beano.

Add to that the fact that I took my driving test in my father's car when I was 19 and he suddenly had a stroke so I had to learn to drive quickly - and that car was a maroon Mk 2 Jaguar.

Also all my children were born in Oxford as well! I don't understand those who are precious about these things.

I don't get it when actors say 'Oh that's something I did 20 years ago I don't want to talk about'. Let's be honest, Doctor Who is special, it's played a huge part in the British public's consciousness.

It's good to see the BBC appreciating it and valuing it now, which they didn't do during my time in the late '80s. I've enjoyed immensely watching it.

However when I left, the ratings were exactly the same, million, as they are now, they were no different. I know the television landscape has changed but it's ironic nonetheless.

I was a little unhappy that [script editor] Eric Saward took the opportunity to say he thought I should never have been cast in the first place, which given the fact that this was a guy I'd entertained in my home and never indicated to me how he felt - I thought it was a bit shabby.

When people you think are your friends let you down that's crappy, but Michael Grade wasn't a friend of mine. Before he came to the BBC he was talking about not liking Doctor Who and thinking that it was a bit of tired old rubbish that ought to be cancelled.

So it was perfectly acceptable when he came there that he cancelled it, and when he brought it back it was entirely his prerogative as head of BBC One to say that it was time to change the actor.

I don't actually think it was personal. At the time I thought 'he doesn't like me and thinks I'm a rubbish actor'. But with the benefit of information from third parties it's quite clear that he just didn't like the programme.

Fighting monsters is dead easy. Just walk away from 'em at a brisk pace and you're safe. A young man had written asking if he could "fix it" for him to meet the Doctor and travel in the Tardis.

After the lad had saved the day and the Sontarans had been "fixed", Savile entered the set and did his usual self-congratulatory shtick.

I didn't warm to him. His demeanour was neither friendly, nor inclusive. He behaved much as one might expect a child to behave who had been indulged and led to believe that life revolved around them.

There was certainly none of the professional respect that one would expect to be shared when two programmes combine for a special purpose.

Even though we were on the Tardis set, it was very much his territory and his agenda. A special scene was written, called A Fix with the Sontarans, which we duly rehearsed and recorded.

The other actors and I had worked hard over a couple of days to create a relaxed atmosphere, but the first and only time he saw Savile was when he came on the set when the cameras were rolling.

His eyes were cold and his demeanour patronising. I recall clearly the disappointment I felt for the young boy for whom I suspect the whole experience was daunting and overwhelming.

At least it was I who got to put the Jim'll Fix It medallion around his neck. There is of course a huge difference between finding someone creepy and patronising and suspecting them of being a sexual predator.

I only hope that the BBC's failure to investigate him does not tarnish, in the eyes of the world, an organisation that has rightly been regarded as a bastion of honest and honourable broadcasting for decades.

There may have been individuals who could or should have been braver in confronting the unpleasant possibility of his depravity when rumours and accusations surfaced, but that is evidently also true of the hospitals and mental institutions that trusted him to the extent that he had his own set of keys for Broadmoor with living quarters on the site and a bedroom at Stoke Mandeville Hospital.

A picture is emerging of a man unusually adept at manipulation and concealment. Identifying willing co-conspirators and abusers is much more important than demonising the bamboozled who may have thought their suspicions so far off the scale of decent human behaviour as to be unbelievable.

I can't believe he has gone - it is a great shock. Of all of the interpretations of the Doctors, his was the most straight in terms of avoiding comedy.

I'd enjoyed playing the part enormously; it's not often in an actor's career that he gets a plum part like Doctor Who , and to say that I foresaw myself going on a little longer is a bit of an understatement.

I never turn down scripts without good reason. If I did, I would probably never work. As any actor will tell you, the hardest thing to do is small parts, because you focus all your attention and concentration on that small part.

When you're playing the lead part, you don't have time to think about the whole of it, so you just have to steam on and get on with it.

I'm an actor. If you had said to me before I started acting that I'd get two bites of the cherry - you would do things that people will remember forever like The Brothers which I did in the '70s and now Doctor Who - I'd have been overjoyed and I still am.

It's appalling that the accident happened, but it was an accident and obviously if I knew there was any risk, I'd be foolish to do it.

I'd love to stand outside the Earth and look at it. Extraordinary feeling that, something that we've been tied to for millions of years, and a handful of people have looked at it, to be able to do that would be stunning.

I know there are some people who rate my Doctor quite highly. It's just there's an even greater number of people who don't rate him at all.

And it wounds me. I should be able to rise above it, and pretend I don't care, but I actually do care.

A lot of people say "I used to love Doctor Who and those shaky sets" but I think their memory is letting them down. We didn't actually notice the shaky sets then.

Although Matt Smith is known to have written several short stories featuring the Doctor in preparation for playing the Eleventh Doctor , as of none have been published and thus it was not until the release of the Scratchman by Tom Baker that another Doctor actor has been credited for writing published Doctor Who fiction.

He was once married to Liza Goddard. He had 5 children. Jack is the most well known for activating Baker's support for the Foundation for the Study of Infant Deaths.

Jack died of Sudden Infant Death Syndrome in Since then Colin has had 4 daughters including Rosie Baker , all of them and his wife played themselves in The Five ish Doctors Reboot.

Since , Baker has written a column for the Bucks Free Press. They announced a second collection, including Baker's Doctor Who fiction entitled Gallimaufry.

Although it is said the two didn't really know each other, Baker paid his respects to the late Elisabeth Sladen after she died the same year.

In , Baker finally saw a chance to perform a genuine regeneration story for his Doctor in the Big Finish audio anthology The Sixth Doctor: The Last Adventure , putting to bed his jest that he had never handed over the role, which he discussed at length in the commentary featured with the release.

At 28 years since his exit from Doctor Who , he holds the record for the longest time an actor who played the Doctor has waited to perform a regeneration scene after leaving the series, even surpassing Paul McGann 's extensive wait of 17 years.

What's On Stage. Archived from the original on 13 October Den of Geek. Gallifrey News base. Retrieved 10 October The Daily Telegraph.

Doctor Who: The Lost Stories. The Diary of River Song. The Adventures of Don Quick. No — That's Me Over Here!

The Mind of Mr. Harriet's Back in Town. Orson Welles Great Mysteries. The Brothers. For Maddie with Love.

The Citadel. Swallows and Amazons Forever! The Young Indiana Jones Chronicles. Doctor Who: Dimensions in Time. The Airzone Solution.